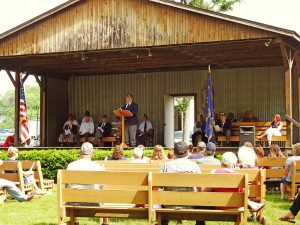 NEW BETHLEHEM–Key milestones will be marked when  this community’s observance of Memorial Day takes place this year, and planning for that event is now in order, according to the

local veterans who have set the stage for the program scheduled for Saturday, May 25. at the Gumtown Park.

Ray Ishman, service officer for the sponsoring Walter W. Craig Post 354 of the American Legion,  announced this week that the annual event that pays tribute to America’s fallen heroes of all wars will be held with the traditional rites as well as some new activities worked into the schedule this year.

In the event of inclement weather, the service will be moved to the First Baptist Church at the corner of Broad and Lafayette streets. 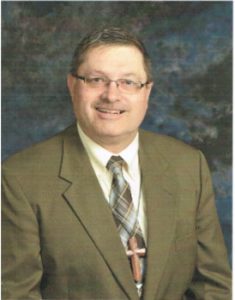 The featured speaker at this year’s ceremony will be the Rev. Bud Davis, senior pastor of the Redbank Valley United Methodist Ministry since July 1, 2017,  and a U.S. Army veteran. He grew up in Hermitage, located in Mercer County, and he left his hometown when he enlisted in the Army in 1976.

He served on active duty at Fort Knox, KY, until ending his three-year duty tour in 1979. While at Fort Knox his combat engineer platoon provided support for the base’s tank training battalions.

After completing his service contract with the Army,  Pastor Davis enrolled into college where he obtained a baccalaureate degree in parks and resource management with an emphasis in wildlife management and then went on to earn a master’s degree in biology.  After working for 23 years in the environmental field he change to doing construction inspection on highways and bridges. Rev. Bud Davis

The Memorial Day program will include patriotic music provided by the Redbank Valley High School band and alumni, under the direction of Eli Terwilliger, and taps will be rendered by the mother-son duo of Debbie and Matthew Green. The national anthem will be sung by the barbershop music quartet, “Special K,” and  one of the Legion Post’s members, Michael Mazzocco, will present the hymn,”Amazing Grace,” on his bagpipes.

Ishman also announced that special recognition will be given to the history of the national American Legion, which was founded 100 years ago in Paris, France, following the conclusion of World War I. That conflagration was called “the War to End All Wars,” or the Great War.  Not only was the American Legion founded in 1919, but so was the New Bethlehem post of that organization. It was at that time that the local post was formed and named in tribute to Walter W. Craig, who was the area’s first soldier to volunteer to military service just days after war was declared, and he was also the first local soldier to die in that war.