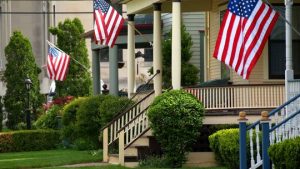 With winter for the new year now expected to be in the rear view mirror, the Walter W. Craig Post 354 of the American Legion is urging the public to greet the spring and summer seasons with new American flags that reflect pride in welcoming Old Glory,  a spokesman for the military service organization have announced.

“The timing is just right for people who want to be ready for May, a month in which we not only have Flag Day, but also one of the most revered of patriotic holidays, Memorial Day, coming along later in the month,” the spokesman said. He added, “As usual, the winter and early spring seasons inflict a lot of damage on flags. They endured the harsh winds as well as having been exposed to the weather and the strong ultraviolet rays of the sun in the summer and fall of last year. Flags that have undergone such exposure–especially if they have been displayed outdoors over the months–usually are due for having a fresh replacement.”

Flag protocol calls for having national banners that are not faded, tattered or torn, and this is the time of the year when special attention should be given to assure our national emblem is presented with the most appropriate display, the announcement concluded.

The local Legion post, as well as the American Legion organization itself, is now celebrating the century mark of their existence, and to help make the anniversary fresh in the minds and eyes of the public, a renewed emphasis is placed on keeping the national flags displayed in a manner that pays the proper respect to these national symbols.

The local organization not only puts out the reminder of proper flag protocol, but also has enlisted the assistance of several local business establishments in making new 3×5-foot American-made flags available in the community.  Ray Ishman, the post’s service officer, said flags offered through the local Legion post can be purchased for $20 at Heeter Lumber, RMS Furniture, Hetrick Farm Supply, Redbank Valley Chevrolet, Nolf Motors and The Jewelry Shop. The standard-sized flags available through  the Legion are 3×5-feet in size, Ishman noted, but said that larger sized banners may be ordered through the veterans’ organization.

The first May holiday where the flag is given special honor annually is Memorial Day, which has its official recognition this year on Monday, May 26.  The local commemoration this year will be held, as usual, on the Saturday immediately preceding the official date, which this year will be on May 25 at Gumtown Park, beginning at 10 a.m.  Additional details on that ceremony will be announced closer to the holiday.

Other preparations are well underway for the Redbank Valley area to properly observe  Memorial Day and the coming summer-fall season, Ishman said, pointing out that the Hometown Heroes banners of the past two summers will be presented with a total of veterans’ photograph this year to total at least 50 more than the number that adorned Routes 66-28 beyond the town limits of South Bethlehem and New Bethlehem last year.

Another military-themed program being promoted through the American Legion this summer, the post service officer added, is the seeking funds for the development for a Veterans Memorial Park, for which a site has been purchased and will be constructed as funds permit. This park will pay tribute to any veteran who lives or did live in the Redbank Valley area, and will feature  special engraved large monuments of the major wars from the Revolutionary War up to today. Also to be featured will be pavers or bricks that will be engraved with the names, ranks, branches of service and period of service for participating wartime or peacetime veterans for whom the pavers are ordered.

Ishman said provisions have been made to have up to 300 engraved pavers to be purchased to recognize area veterans throughout the nation’s history up to today. The pavers are priced at $100 each.

Updates on the Hometown Heroes banner projects and the Veterans Memorial Park program will be issued periodically, Ishman concluded.